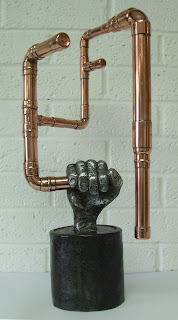 Finally, after many months of toil (and indecision) my latest project is complete. Here is the (long) story of how it came to be.
The starting point was a collection of copper plumbing pipes I had joined together for practise on a course I attended.  I wanted to mount these on a base somehow to show off my soldering prowess, but I felt there ought to be something holding the pipes away from the base - partly for aesthetic reasons and partly to enable "proper" attachment (rather than wiring or gluing it on haphazardly).
"What better to hold something than a hand" I thought - hence the idea for the joining piece "Fist".  "Fist" was made by first constructing a master from casting wax.  Using my own hand as a guide (but reducing the scale somewhat), I simply fiddled around with lumps of the wax until I got the slightly naive shape I wanted (it was never my intention to make a perfect replica of a hand or I would have made a mould of one).  Next was to pack it in sand (with the usual hardening agent added) and to burn out the wax in our bespoke burn-out oven (crafted by our tame master craftsman/handy-man Bryn).  This process is SUPPOSED to leave a perfect (negative) replica of the wax master in a rock-hard sand shell, however due to circumstances entirely within my control, (i.e. I messed up the sand mix), I was left with an almost-perfect-but-rapidly-disintegrating negative in somewhat soft sand.  This was NOT good as the wax hand had taken me AGES to make. Anyway, with a significant number of fingers crossed and with the help of Toby's steady hands (and a roll of gaffer tape), we managed to get the sand-pie to the casting table, whereupon we filled it up with molten aluminium. The mould seemed to hold (he rhymed) - at least it looked that way from the outside, so after a minute or two to let the metal relax we cracked her open... and... we had "Fist" - complete, with no holes and fairly minimal damage - success!
With the top two parts in the bag, the time had come to think of the base. Wood? Stone? Swiss-cheese? This remained somewhat of a conundrum until a nearby bohemian (Toby) suggested making use of a concrete block he'd made recently. Not questioning the seemingly random act of construction on Toby's part, I sprang into action chiselling away like a demented (and decidedly less skilful) Michaelangelo.  Some months later I had a roughly cylindrical shaped block with a hole in it ready to accept fist.  Here's a photo of the piece at that stage: 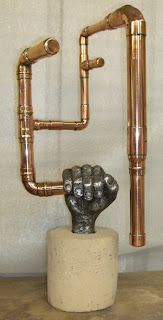 But what now...?  The concrete looked "OK", but it didn't really have a smooth enough finish to warrant staying in this state as a finished piece.  Some weeks of mulling things over and not doing very much ensued, until one day, that familiar bohemian voice squeaked "why not clad it in lead"?  Another genius suggestion from the Robson stable I thought and so got to work hammering flat some lead roof flashing and wrapping it round the base.  As a final touch, I buffed it up on the buffing wheel using one of our older, blacker mops.  This gave a really nice dark sheen to the base and brought "Project Fist" to its conclusion.
What next?  A selection of cast cores based around a central theme methinks ;-)
Until next time.
John
Posted by Black & White Casting at 20:49