Back on the blog

I have indeed been remiss with my blogging (see Toby's comment below).  having said that, I haven't actually done much of late - the allure of being side tracked into various Robson family projects often proving too strong to resist :-)

I have however, made some progress with "project cage" (see the photo of the pinkish carved core in Toby's blog entry below).  For now, all I want to say is that it will consist of a cast aluminium "cage" (the carved core) and that there will be a central "item" (for want of a less ambiguous description) trapped within said cage.  It'll sit on some kind of lead-wrapped base.  Or maybe oiled wood.  Or possibly a carved potato.  Who knows.

Another week, no dollars!

Yesterday worked out.... 'okay' (let damn it with feint praise). The day kicked off with Bryn's white van arriving over at the shack just after us, so John and I helped him out raising up some steel steps up for mein landlords, Ma and Pa. Bryn's cunning use of tie-straps and the van had the thing hoisted into position in double quick time - though not without my mind quietly playing the Casualty theme and musing over the correct first aid treatment for crush injuries. Anyway, its up in place now -giving Mum and Dad access once again to the top of the barn (which also contains some of my junk - BUT in contradiction to my Pa's goadings, its MOSTLY my sister's!)

Then we adjourned to the house for the dreaded ball-of-the-foot. I won't dwell on the unedifying spectacle of our national team playing like a bunch of strangers - or Capello's frankly bizarre selection. I'll simply let the following photo express everything John and I felt about it ;-) 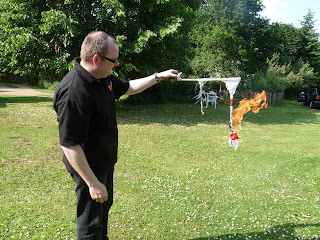 Anyway, after that I busied myself grinding off some flashing from the three plates I cast over at The Bullpen - though apart from loading the car with the brazier, thats about as far as my efforts to tick things off the to-do list got, I'm afraid. Doh. Well, in addition to the things already listed, lets actually add a few more:

1. Making up polystyrene bases for the 'sea shell' castings.
2. Start making up pattern for fish casting for Cotswold Water Park (potential commission...?)
3. Sending a link for the site over to Garden Art in Hungerford to see if they might be interested in any of our work.

John cracked on with his carved core - a very strong form - picture below. He's been remiss with his blogging of late, so I'll let him tell you about it! 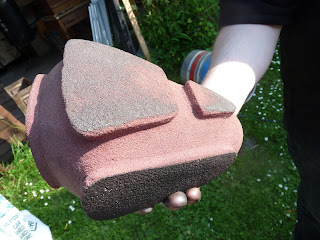 Oh, John's been working on some mighty fine looking cards to help promote The Shack. More on these soon!

Toby
Posted by Black & White Casting at 12:44 No comments:

Back to the Shack tomorrow (with a compulsory break to go inside the house to watch the dreaded ball-of-the-foot. As it's against Germany, subsequent posts tomorrow MAY be alcohol influenced)

Anyway, here's what I've got to remember:

1. Take unused Alpha-set mold from last week's iron casting to use as possible carved core
2. Take 'sea shell' pieces to develop new mounts (these featured as part of the Belgravia exhibition - I was never happy with mounting all three together on a carved cell-block plinth. I had a moment of inspiration yesterday looking at some barnacles... More on this to follow!
3. Cut top off old beer barrel to make mini-brazier for home garden & fill punchbag with vermiculite as supplied by Bryn (its not all art here you know!)

Was browsing around for sites related to casting when I stumbled across this picture of a piece by Jim Wade which is sat in my front room as I type (http://www.internationalfe10.com/gallery.php). Toby 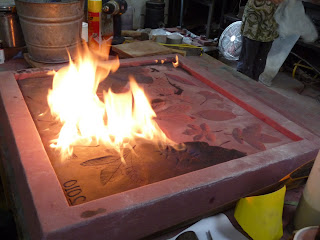 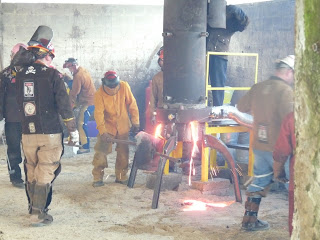 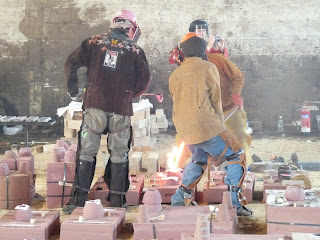 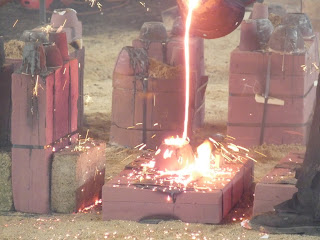 ... before bed - a new and as yet un-named casting in aluminium and copper set on Bath stone poured this weekend and mounted/polished in very short order. This was the wax piece I melted out last session before I went off to Belgium. Despite my concerns that our wood and charcoal melt-out oven wouldn't have got hot enough (maximum temperature I measured was a mere 180oC), it seems to have cast very cleanly. Toby 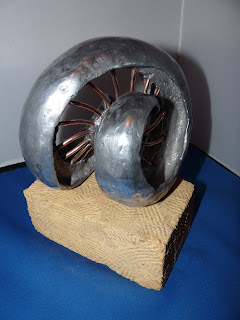 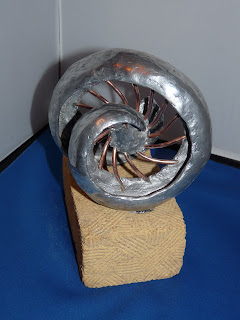 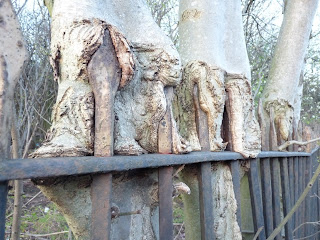 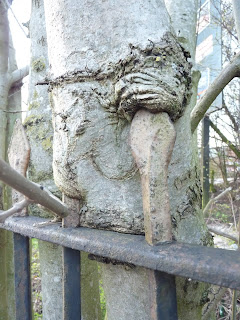